I’m just a guy who likes pinball. There’s something awesome about pinball that can’t be replicated in video games. The vibrations and physicality you feel every time that heavy steel ball gets flung around. The way the incandescent lamps light up the playfield.

I took the plunge and bought my first machine in early 2011. By the end of the year, my collection had already grown to four machines. This site chronicles my efforts to learn how to fix, maintain and restore pinball machines.

Of course, I like to play pinball too! For a long time in addition to “me against the machine” that meant pinball nights with friends. These days, there isn’t much of that happening, so I’ve turned to the internet instead. Come see me play live on twitch, hang out and chat! 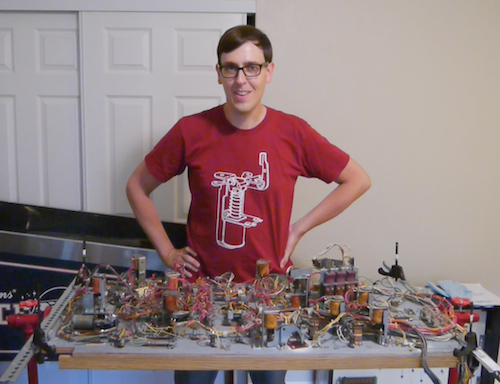 After you buy your first pinball machine, it’s only a matter of time until it breaks. This can be daunting at first but soon the repairs become just as fun as playing. Learning new skills, learning how the games work mechanically and electronically – it’s all part of it! This site attempts to document some of my fun adventures working on games and giving them new life.

I’ve also always thought it would be really cool to build my own pinball game – a new game based on my own design, but in the style of the golden ear of DMD games in the mid 90’s. My first attempt at this, codenamed “Alpha Bravo One”, is on hold for now as I quickly realized this is no simple undertaking. I hope to resume my efforts here when I have more time to dedicate to it. In the meantime, there’s plenty of pinball to play and to fix!

It takes time an effort to write content for this site. You can support my efforts by buying some neat Alpha Bravo Pinball merchandise on my Teespring Store.