Posted on March 6, 2011 by pinballproject

STTNG doesn’t have a standard plunger to launch the ball like most pins. Instead it has a trigger-controlled catapult that launches the ball using a solenoid and plunger – the same kind of actuator that powers flippers.

On my machine, the ball isn’t getting as much speed as it should. It’s pretty obvious because when the ball is launched, it is supposed to have enough speed to hit the drop target under the Borg ship and get into the rat hole. Most of the time, it doesn’t. This is a critical fault because of the way the game works: by launching balls into the rat hole, it pre-loads balls in the underground tunnels so that the machine is always ready to load the phasers. If the catapult can’t reach the rat hole under the borg ship, balls don’t get to where they need to be and the machine won’t let you start a game.

I raised the playfield to take a look at the catapult assembly from underneath. You can see it at the very top right in the picture below. 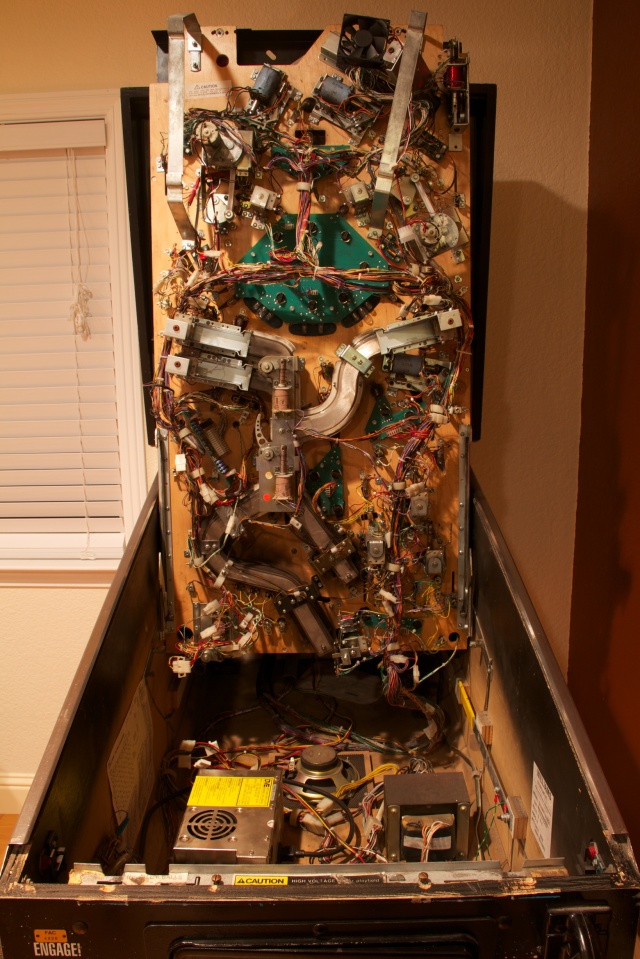 It is pretty obvious when looking at this in detail why it’s not working consistently. There are two screws that secure the stop bracket to the catapult bracket, and one of them is missing! Look just above and to the right of the red coil in the picture below:

Without that second screw, neither the stop bracket nor the coil are secure… As a result, each time the plunger is actuated, the whole assembly shifts and moves around a bit. That can’t be good, since proper alignment of the coil and plunger is critical to smooth operation. Sure enough, a good amount of resistance can be felt when driving the plunger by hand. When taking care of aligning everything, however, the resistance is gone and the plunger moves easily.

So, it looks like the problem with my catapult may just be a missing 39c screw!

This entry was posted in Uncategorized and tagged sttng. Bookmark the permalink.