Posted on October 25, 2011 by pinballproject

After missing Pacific Pinball Expo this year, I decided to make up for it by traveling to Chicago for “the real deal” – Pinball Expo. Chicago has been the home of the pinball industry for a long time, and is hence the perfect home for the expo.

The expo had a very different feel than the pacific expo. While the games-to-play area is much smaller, and focused mostly on 1980’s and later games, the exhibitors area is much larger, and there is much more of a focus on seminars. The seminars were definitely the best part in my mind. After all, I can play pinball at home or around town, but the seminars were interesting, varied, and fun. See below for highlights.

The first day of the expo (Thursday Oct 20th) started out with a tour of the Stern factory. It was pretty cool to see the facility where the machines come together, along with the workers at work!

The first station was where they make wiring harnesses, which are done in house. 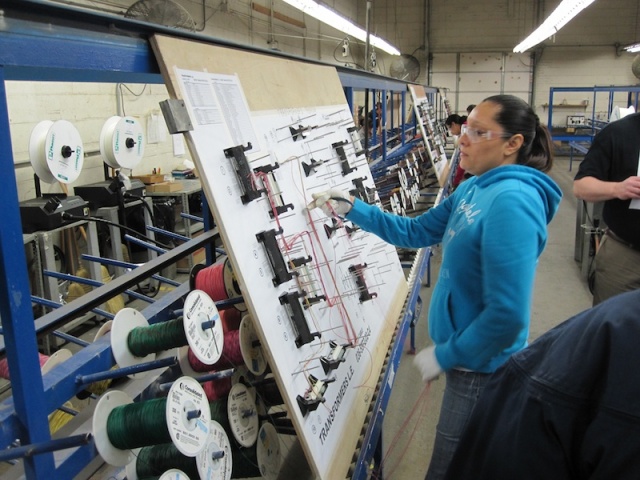 You can see how they configure the jig for each particular game. Connectors are installed on the harnesses at this station. 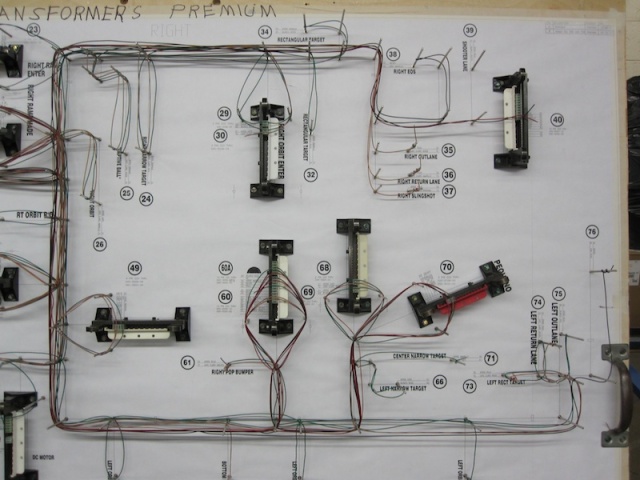 The completed harnesses are hooked up to a test station to verify they are complete and correct. Much easier to verify it’s working now than after it’s been installed in a pinball machine! 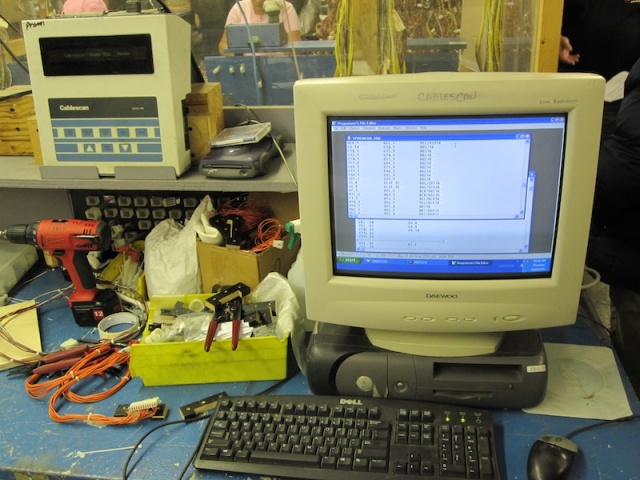 Here is a rack full of completed wiring harnesses. They say each machine has over a half-mile of wire! 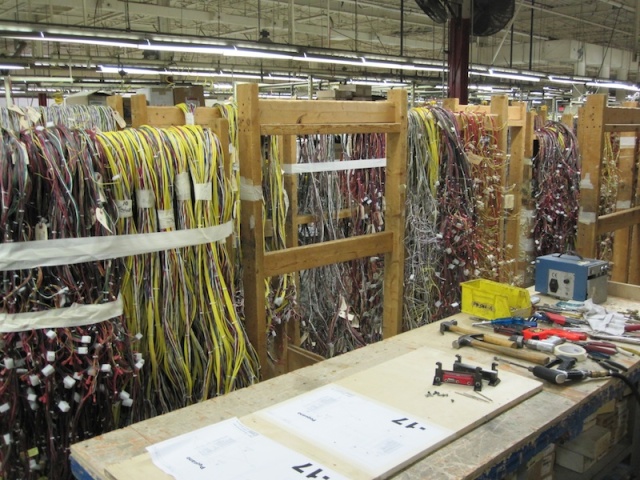 Blank playfields are produced by a sub-contractor and arrive in big stacks with the artwork already applied. 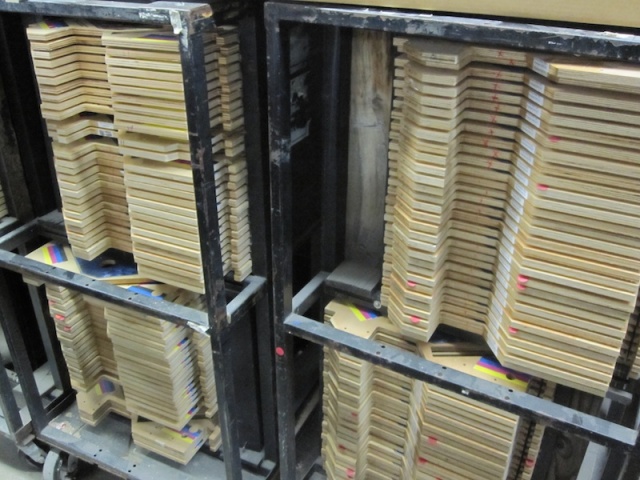 They are put in a giant press that dimples the playfields in the locations of all holes that will need to be drilled out. 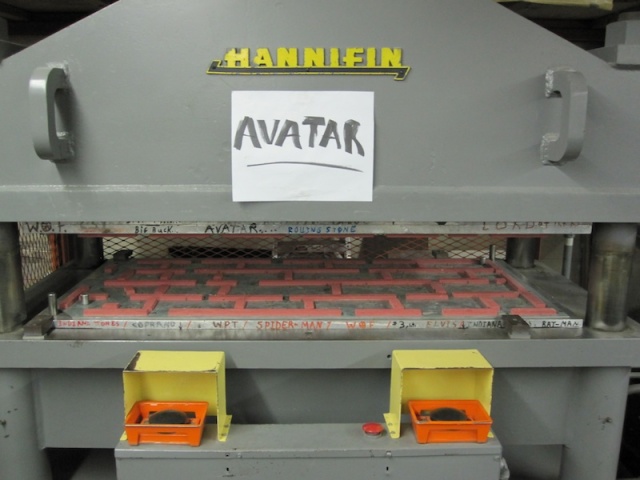 Here’s a close-up of the inside of the press. Notice the pins on the top and bottom, to dimple both sides of the playfield simultaneously. 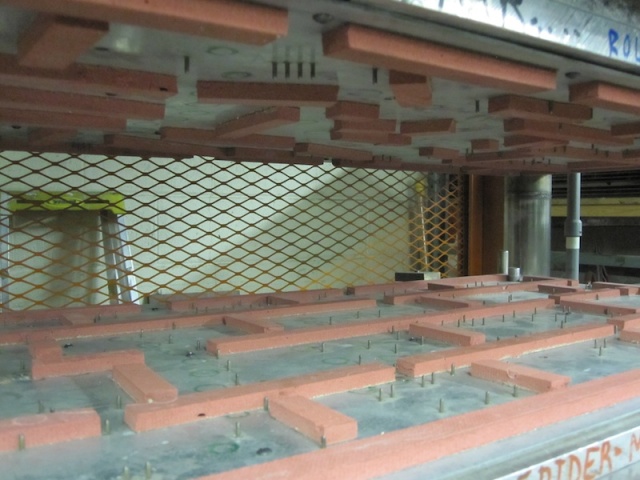 Then the dimples are manually drilled out. Gary Stern talked to us and was very proud to point out that there are only a couple of the above presses in the entire world, and that you cannot build a pinball machine without them. This was almost undoubtedly a quip targeted at the newest kid on the pinball block, Jersey Jack Pinball. Seems to me though you could just forego both the dimple press and manual drilling altogether and CNC-drill all the holes. 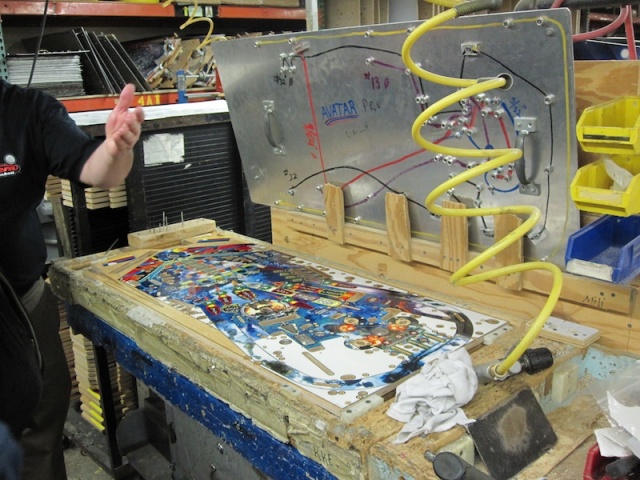 At another parallel area of the line, the artwork decals are applied to the cabinets. The cabinets themselves are built by a sub-contractor and delivered flat black. 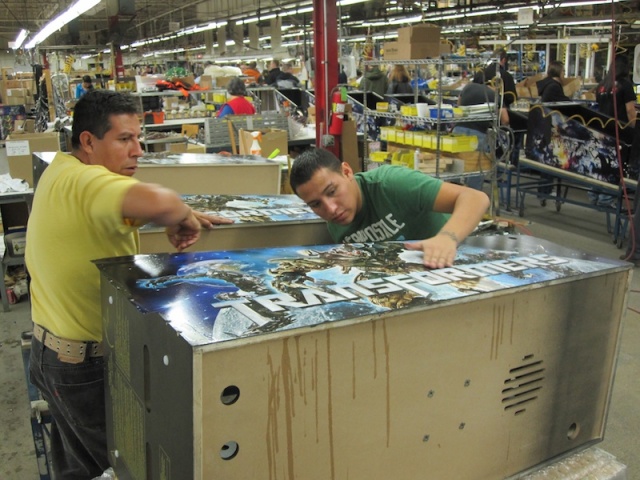 Finally the playfields go down the line and parts are installed first on the bottom then on the top. The fascinating part was that there were multiple kinds of games on the one line at the same time – Avatar and Transformers. The workers are able to nevertheless keep things straight. 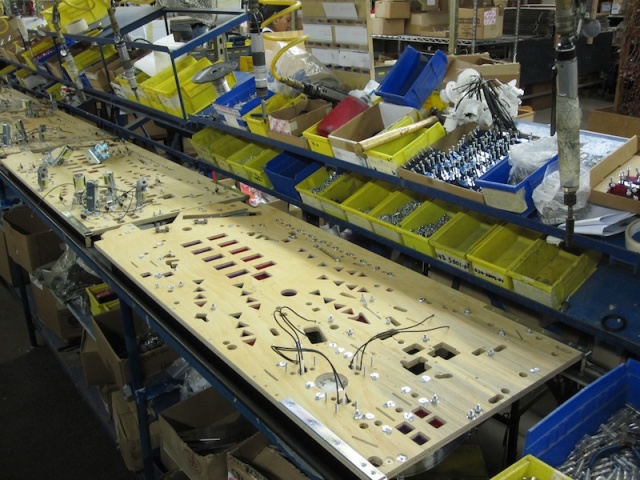 Notice the green riveting machine in the background of this next picture – looks like an aircraft manufacturing tool. 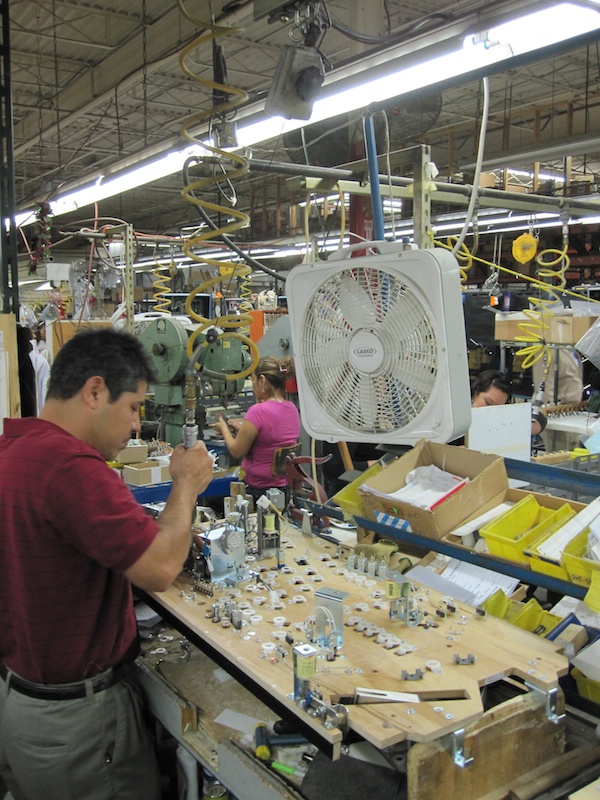 Finally the playfields are complete and undergo testing before being installed in a machine. 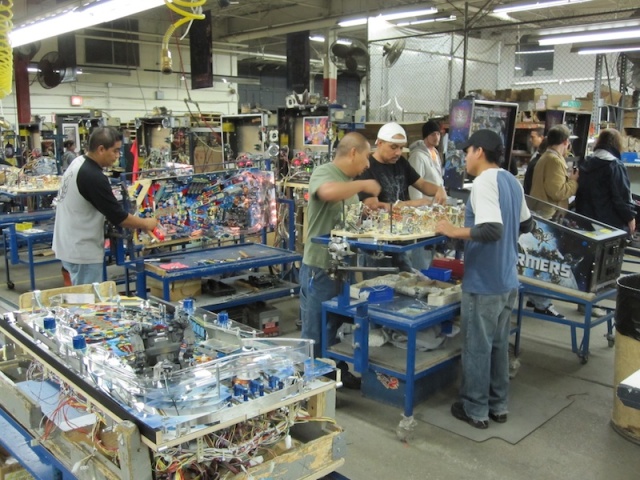 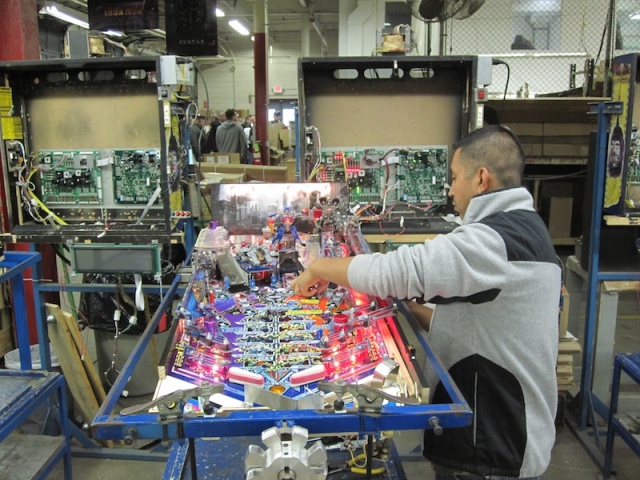 The playfield “toys” are also made off-site. 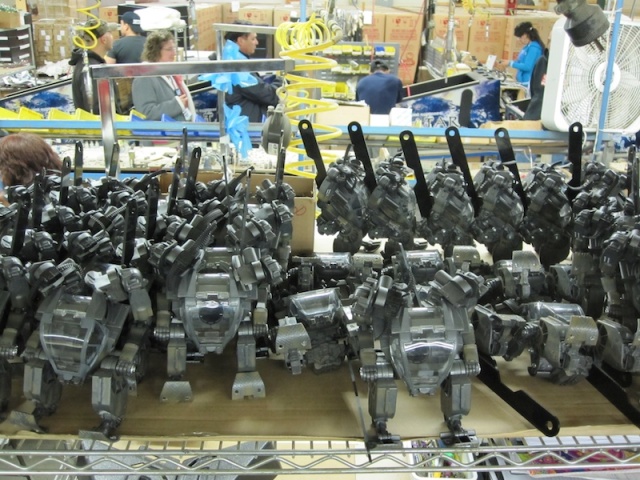 After everything is put together, the machines are tested again. Yes, there are people whose job it is to play-test every machine that comes off the line 🙂

I spent most of the rest of the first day, and alot of time in days two and three, in seminars. Here are some highlights of the most noteworthy talks:

Gary spent some time talking about the pinball market, saying it was split into three different segments – Collector/Enthusiast, Coin-Op Operators, and Rich Doctor/Lawyer. Interesting but not a big surprise. George focused his part on the new Transformers pinball machine, but seemed a bit lost on stage. He spent quite a bit of time fumbling through his laptop looking for things to show off about the game. Unfortunately the overall impression I came away with was not how cool Transformers LE was, but how poor his presentation skills were and how unprepared he appeared to be. If it’s because he was too busy working on his pinball game rather than preparing for a presentation at Expo, then perhaps he can be excused 🙂

Jack appeared in a “Fire side chat” on Thursday night along with his entire team. He has hired what appears to be a very talented team of people that almost certainly have all the skills needed to deliver a world-class game. The most noteworthy part of the talk however was Jack’s relentless negative quips directed at Stern. Other than that, it would be hard to overstate the extent to which their new Wizard of Oz game was hyped up. According to the Jersey Jack team, it will be the greatest thing since sliced bread 🙂 Big words indeed – it will be fun to see if they can deliver on them!

Jack was also the speaker at the closing banquet. He appeared very eloquent and congenial here, and delivered a positive speech about his upbringing and his attitude on life. When talking about the pinball games that he likes to play, he specifically called out two different Stern machines – surely no accident! 🙂 He closed with remarks about the late Steve Jobs, how he admired his tenacity and desire to make great products, and how he hoped he could have the same qualities.

Rick Bartlett of PPS spoke about what it takes for them to re-manufacture replacement parts for Williams pinball machines. It was interesting to hear how much work goes into acquiring the required permissions for licensed themes. All of us that own Williams games are of course very grateful to have such a company out there making parts so we can fix our games and make them look nice.

John spoke about his days at Bally in the 80’s, then at Williams and WMS in the 90’s, and finally about what he has been up to more recently. He told us Tales of the Arabian Nights was intended to be a more “grown-up” Aladdin-like theme. At the closing banquet, John was inducted into the pinball hall of fame, and spent more time talking about his time in the industry.

Steve started out by going through a slideshow of random pictures from the last couple decades, making remarks about his pinball days at Williams and Stern as he went along. It was great listening to him. He was however unable to provide any details about his up-coming game. No doubt Stern has imposed a vail of secrecy on him, presumably to not hurt sales of their just-released Transformers game.

One interesting bit of hardware that was shown was the P-ROC board. In short, it is a drop-in replacement CPU board for WPC and Stern machines that allows you to write custom rules for those machines. The P-ROC board connects to a standard computer via USB, delivers the switch events from the game to the computer, and allows the computer to control all the lamps and solenoids on the game, as well as the dot matrix display on the game.

My understanding is that there are two main reasons you would want to use a P-ROC board: 1. Write better rules for an existing pinball game. 2. Create a custom pinball game. One could either re-theme an existing game as a new game, or create a truly from-scratch custom game.

Shown here is a the Demolition Man game with the laptop driving it sitting next to it. In a finished project, of course, one would probably want to conceal a small form factor computer within the cabinet. 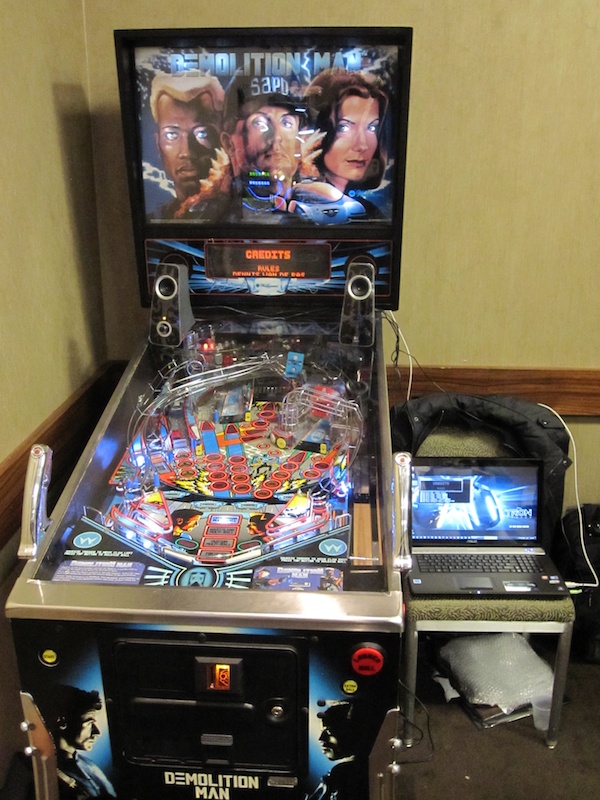 Finally, one picture from the free play area – a game that I had the most fun playing at the expo, and that is almost certainly on my to-buy list – SPACE SHUTTLE! 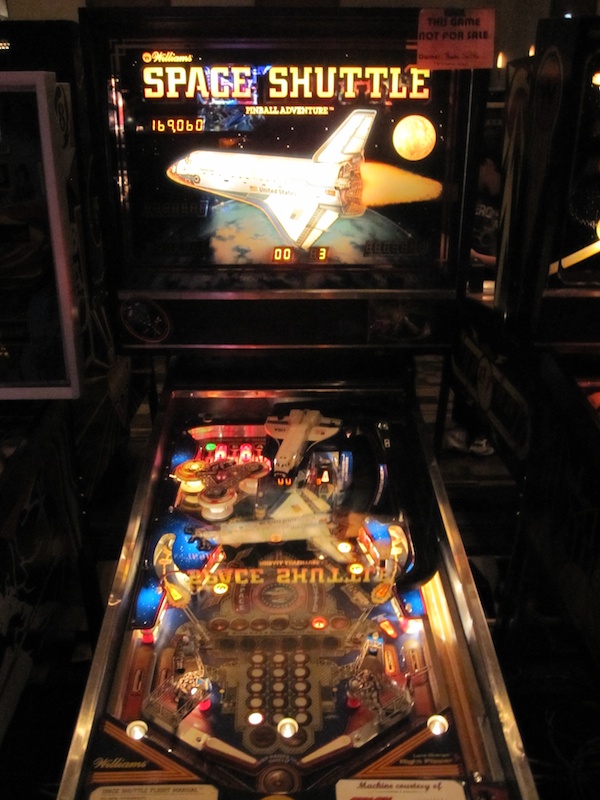 Pinball Expo 2011 was a fantastic experience and I will almost certainly return again in the future. From the availability of all sorts of parts in the exhibitors hall (many at discounted prices!) to the numerous seminars and games to play, there are many reasons for going. There is one other appeal to going that I hadn’t predicted though – the people. Not only are you are surrounded with the heroes of the pinball industry at expo, but you’re also there with a ton of other dedicated fans who, like you, love pinball. It was great, and the three days just flew by!

This entry was posted in Shows. Bookmark the permalink.