Posted on February 22, 2014 by pinballproject

I made a bit more progress on the Space Shuttle playfield swap today, and had fun using a new tool! It was time to tackle the General Illumination wiring. General Illumination is a term in pinball that refers to lamps that light up the game (as opposed to lamps for targets/scoring). Since they aren’t controlled individually, multiple lights can be wired together on a common circuit. Here’s a photo of one section of general illumination wiring on the old playfield. As you can see, Williams (and I’m sure others) used bare exposed wire for these circuits! 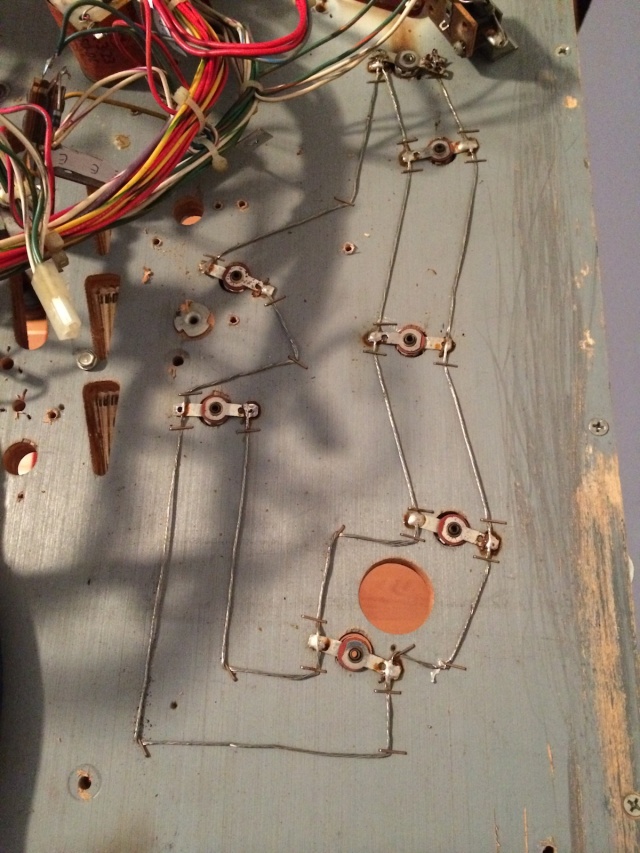 Notice the staples holding down both the lamp sockets and the wires themselves. This is my first playfield swap, so I had to investigate which stapler to get to transfer this over to the new playfield. From what I gathered online, it wasn’t even worth trying with a manual or electric stapler, so I went straight to the big boy tools and got an air-powered one. It shoots 22-gauge fine wire staples which are 3/8″ wide, and I’m using the 1/4″ long (deep) ones for the playfield.

Notice the tool has a long nose, which makes it possible to reach through mechanisms and wiring harnesses if needed. I started transferring some of the circuits over and the stapler works like a charm – it fires staples into the new playfield like it’s not even trying. I even had to dial back the pressure after a staple sliced right through one of my wires! Here’s my progress so far. The biggest GI circuits are done, but there’s a few more smaller ones still left to do.

Except for the new shiny copper wire segments, I transferred all the wires over from the old playfield and re-used them. I was also able to test and re-used most of the lamp sockets – only two needed to be replaced.