Last weekend, I hit another milestone in my Space Shuttle pinball restoration – turning the power on for the first time since the restoration began. I was a bit worried about shorting the switch matrix out with the solenoids or lamps, but being careful during the playfield swap reassembly paid off. With the playfield still on the rotisserie but wired to the cabinet, I flipped the power switch and it came to life! No smoke, no blown fuses! 😀

There were issues, of course, but nothing major. The biggest problem was several lamps not lighting up. After looking at the switch matrix in the manual, though, it became pretty obvious most of the dark lamps were on the same row in the switch matrix. It was clearly a problem with the wire for that row – red with a purple stripe. I went under the playfield and checked all the lamps on that row (even the lit ones). I quickly found the offending wire broken off the solder joint! Notice the loose red/purple wire near the round orange insert in the picture below.

After re-soldering that wire back on, the lamps in that row all came to life! Here’s a pic after that repair.

Seeing it light up after the first repair was awesome. A great feeling of accomplishment for sure, and also a relief that the playfield swap is nearing the end!

With the game plugged in, I could now proceed to testing and adjusting all of the lamps, switches and solenoids. A few fixes were necessary:

With the adjustments made and without any further major needs to access the underside of the playfield, I couldn’t resist moving the playfield to the cabinet! 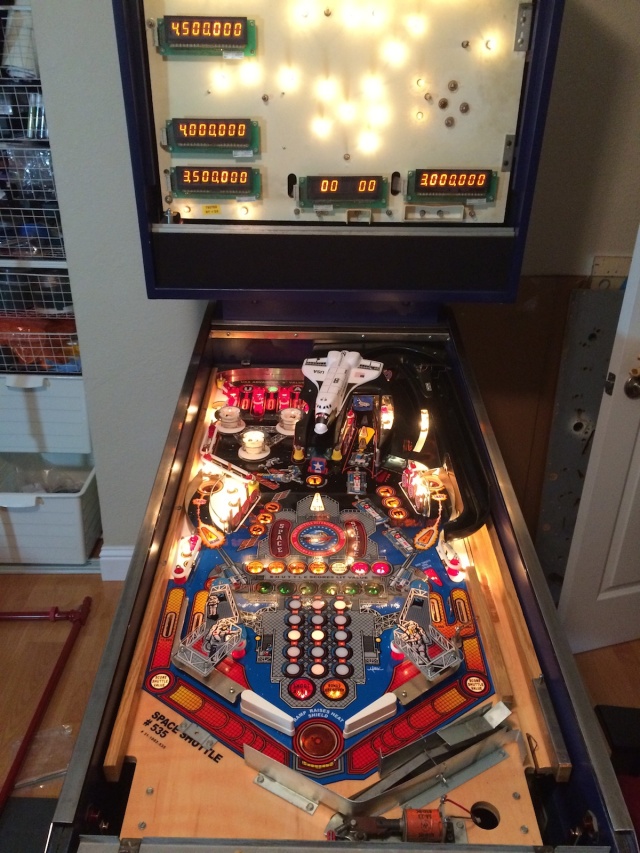 More testing and installing the plastics and apron are the only tasks left after this!