As I described in my Kraylix opening post, my Kraylix arcade cabinet will be both JAMMA capable (primarily to play Capcom CPS-2 games) but will also have a modern gaming PC to play more modern titles such as Street Fighter IV and Street Fighter V. Sure, a PS4 would be cheaper, but I like the ultimate flexibility that comes with using a PC. A few days ago, I went to Fry’s and picked up the components necessary to put the PC together. At times like this, I really like shopping at Fry’s – their prices are very competitive, and you can’t beat picking out parts and having them right there on the spot.

At first, I thought perhaps I would make my own motherboard mounting bracket to install directly in the cabinet, but after thinking it over I decided to go with a standard computer case. It simplifies the mounting of other parts such as the power supply, storage disk and graphics card. Graphics cards in particular are pretty hefty these days, and I really didn’t like the idea of having it hang on the motherboard just by the PCIe connector. The case also grounds, shields and protects the components inside the PC – since there will be other parts in the cabinet, that is an important consideration. Here’s the Mini-ITX (compact) form factor case I ended up using test-fit in the cabinet:

The case is a Thermaltake Core V1 and definitely fits very nicely into the cabinet with plenty of room to spare for the eventual installation of CPS-2 boards. As compact as it is, it fits a full size ATX power supply and has plenty of space for a modern graphics card, too: 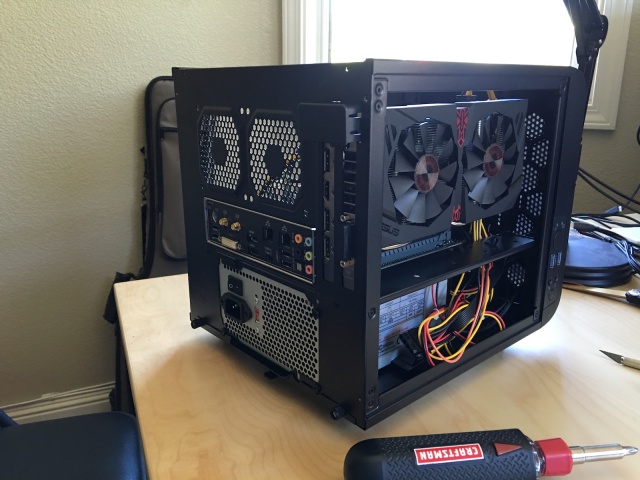 And here’s the top-down view. I’m using the OEM Intel CPU cooler, but there’s room to upgrade to potentially upgrade to something better, too:

Note how the Mini-ITX motherboard is barely larger than the CPU cooler! It’s tiny. Here are the full specs of my build:

Should run most modern games (as of 2016) at or near 60fps @ 1080p, and all in a super compact form factor. The computer will get modified to remotely operate the power button later on, but for now since the cabinet was just about to go out for paint I just needed to make sure everything would fit together well. And it does! 🙂