Posted on July 1, 2016 by pinballproject

This post is years old at this point and the boards pictured below no longer appear to be available – that said there are still plenty of others to choose from on the e-commerce site of your choice. I’ve tried another board design since and have had good results. See also the insightful comments from user “Enlightend” at the end of the post. Thanks!

My plan for sound on the Kraylix arcade cabinet is to use two 4″ JL Audio speakers plus an 8″ woofer for bass. Of course part of having an integrated all-in-one solution for an arcade cabinet means some form of audio amplification is needed – I’m not about to cram a stereo receiver in the cabinet or something along those lines! Thankfully there are tons of decent and cheap audio amplifier boards available these days.

The TPA3116D2 is a popular chip by Texas Instruments used these days in audio amps. It’s very power efficient and hence doesn’t need a large heatsink. Small complete boards using these chips are extremely cheap and readily available on eBay for between 10$ and 20$ including shipping! I did a bit of reading on them online and it seems like results are mixed – but at those prices why not take a gamble and buy a few different ones to test them out? They seem like too good of an option to pass up, especially compared to other options for amps which can easily get in the 100$+ range. I bought three different ones in the “2.1” configuration (two main channels plus a subwoofer channel), each under 20$, hoping for at least one “good” one. I hooked them up to some small speakers plus an 8″ sub for testing. Here are my observations after listening to each for a few hours.

Heres’ the first board I tried:

It didn’t have screw-down terminals for the speaker wires, so I had to solder the speaker wires in directly. Not a difficult task, but my speaker wire was fairly heavy gauge and the small holes on the board wouldn’t fit all the strands! I cut roughly half the strands away and soldered the speaker wires in. This board has a 1/8″ mini jack for line-in, and three dials – sub volume, main volume, and overall (sub+main) volume. So, how did it sound? Pretty decent, actually! I played a range of music and videos, including bass-heavy songs that would push its power consumption quite hard – no problems at all, and the board didn’t even get hot under prolonged testing. Then I paused the music and noticed a problem – an audible whining noise coming from the speakers. This board seems to have noise problems that are pretty obvious when audio isn’t playing back, no matter what the volume knobs are set to. Bummer. I even tried with two different power supplies (which are not included) but got the exact same results with both.

So, I moved on to board #2 to test, hoping for cleaner audio: 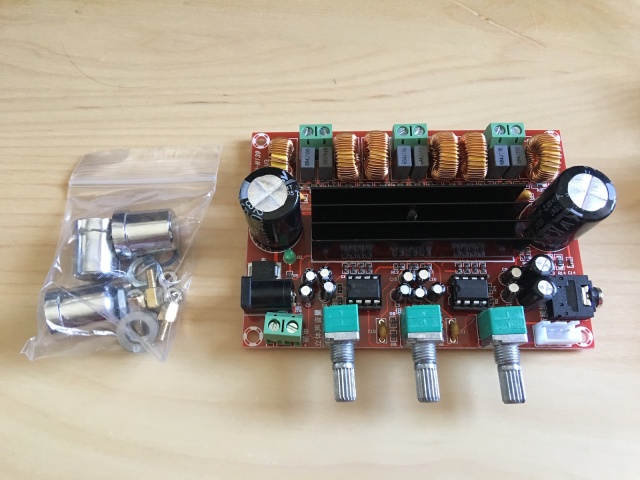 This board has the same volume control configuration, but came with nice knobs to install on the potentiometers. And notice how it also has screw-down terminals for not only the speaker wires, but also for the power supply in case you don’t have one with the right connector. Those are nice features over the first board. So how did it sound? Clean! Good sound at this one, and no audible whining noises! This one would work nicely in the arcade cabinet.

But I had yet another board to try out – here’s board #3: 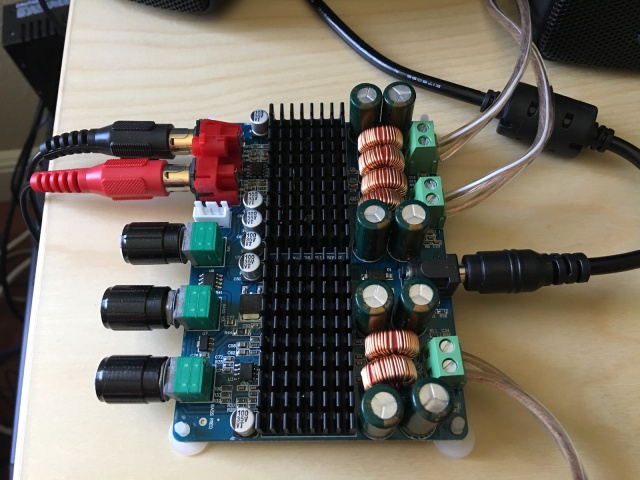 The nice knobs came pre-installed, it has screw down speaker wire terminals, and it uses RCA jacks vs the 1/8″ mini-jacks on boards #1 and #2. I got nice clean sound out of this one, too! But the biggest difference between #3 and the other two were actually in the configuration of the dials – where as the first two had only volume controls, this board has two volume controls (sub, main) and the third knob is a low-pass filter frequency control for the sub channel. This is a very useful feature for tweaking the sound of the woofer, and for that reason I will most likely use this board in my Kraylix arcade cabinet.

Those were the main differences I found. There were some common points, too, though – they all produced very reasonable volume levels without any clipping, and none of the boards heated up much at all. The bass channel of all three sounded pretty similar, too, and although these boards are advertised as 2.1 channel (where the .1 is a subwoofer channel), I think it’s a bit of a stretch to call it a subwoofer channel. They all sound to me like the output drops off significantly below say 100hz or so. They’re more like a bass channel, which honestly will suit my arcade cabinet build just fine.

For what it’s worth, I have no idea how consistent the quality is on these boards, or why I got a whining sound from the first one but not the other two. It’s possible my board #1 was just a bad copy, but who knows. It’s hard to argue with the price – I think these boards are a tremendous value.

My plan is to install board #3 inside the Kraylix, right next to the coin door – this should allow for easy access to the volume controls while playing.

3 Responses to A Few Words on TPA3116D2 Audio Amplifiers