Posted on February 1, 2014 by pinballproject

Today I made some more progress one the Space Shuttle pinball cabinet re-painting. It was exciting to proceed to the third and final color, white!

I started with the backbox. The stencils I bought came as one big piece, but alignment over the red color is critical and I figured it would be way too difficult to align it all at once, so I broke the problem down by cutting the white stencil into smaller pieces. The stencils are super sticky, and once they’re on… they’re on. Cutting it into smaller pieces made it more labor intensive to mask everything off – the lines between the pieces needed thin tape strips to be sure no white paint bled between them – but it was definitely way easier to get the alignment right and I’m glad I used this approach.

What you can’t see in the picture above is that the stars below the feet of the astronaut are indeed a separate piece, but no tape was needed at the seam due to the pieces overlapping. I also had to use some painter’s tape to form the line on the right side, since the stencil was designed for smaller backboxes.

Here it is with the white paint applied and the masking pulled! Really happy with how the Williams logo and stars came out, and the now-two-color astronaut looks pretty good too. There’s some very small appearances of blue on the white/red edges that shouldn’t be there, but this should be fairly straightforward to patch up later.

I used the same approach on the opposite side of the backbox, slicing up the stencil in the same exact pattern – definitely took less time the second time around 🙂

Finally, I had just enough time left in the afternoon to do the front of the cabinet. Again, I cut the stencil into smaller parts. 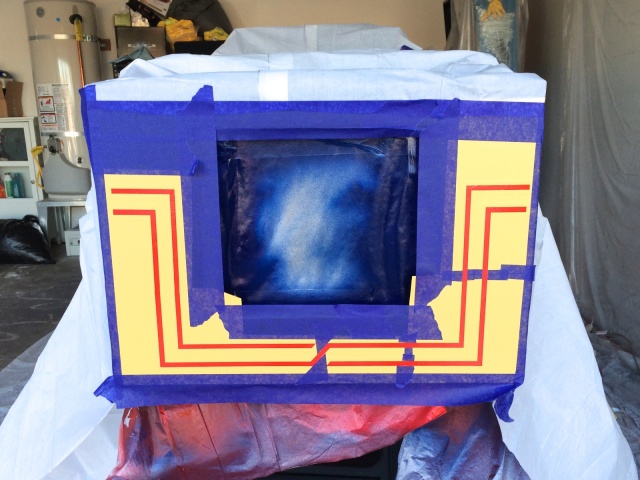 And here it is after the white paint:

It’s not easy to get the white stencil aligned to the red one – part of the problem is how opaque the stencil is, so it’s hard to see the red underneath. I got most of the pieces very well aligned here, except for the one at the top left. Notice that the vertical white lines on the left get very very close to the edge of the red ones. It doesn’t look great, so I erased them down to about the middle of the vertical section and will re-paint them next time alongside the rest of the cabinet!